Fatty fish, like salmon, sardines, and mackerel are some of the best natural sources of omega-3 fatty acids (1).

Because of this, most people reach for fish oil supplements when they want to boost their omega-3 intakes.

But what about vegans and vegetarians? Are there good vegan supplement options available for them too?

To answer this question, let’s review the different types of omega-3 fatty acids and then discuss which vegan omega-3 supplements are best.

Please note that this article contains affiliate links. If you click one of these links and make a purchase, I will earn a commission at no extra cost to you.

What Are the Different Types of Omega-3s?

There are many different types of omega-3s fatty acids, but only a few have been well-studied for their health benefits (1).

The three main ones are ALA, EPA, and DHA.

Let’s review each one in-depth to learn more.

ALA is a “short-chain” omega-3 fatty acid, because it contains only 18 carbon atoms (2).

It is also an essential fatty acid, meaning that the body cannot make it and we must get it from food.

ALA is the main vegan omega-3 fatty acid, found mostly in plant foods.

Some of the best sources include:

As you can see, it is generally easy for vegans to get enough ALA in their diets. Just one serving of walnuts provides more than the average adult needs in a day (19).

But… eating ALA alone isn’t enough.

ALA is just one type of omega-3, but we also need the other two types, EPA & DHA.

Humans can convert ALA into EPA (which can then be converted into DHA), but not very effectively (20).

Sadly, this already poor conversion can be cut in half with a diet containing too many omega-6 fatty acids (which is typical of the Standard American Diet) (25, 26).

We actually know the genes involved in these conversions too (FADS1, FADS2, ELOVL1, ELOVL2), so genetic testing can tell you a little bit more about how well your body handles them (27, 28).

To get around the genetic variability and overall poor conversions between ALA, EPA, and DHA, many people choose to take EPA & DHA supplements. That way, you know exactly how much you are getting.

However, ALA still has some benefits!

While ALA does not appear to have the exact same health benefits as EPA and DHA, it is still a required nutrient in our diets (29).

Preliminary studies show that ALA may enhance heart health, protect against inflammation, and improve brain function, but more research is needed (30).

Since ALA is relatively abundant in foods, it is not commonly taken as a supplement.

Grass-fed meats are also “good” EPA sources (containing at least 30 mg of EPA + DHA per 100 grams), which is on par with the amounts found in some white fish, but still far less than fatty fish contain (33).

Grass-fed dairy and pasture-raised eggs contain even smaller amounts, but still serve as the main sources of EPA for some vegetarians (34).

Are there any vegan sources of EPA?

Unfortunately, there aren’t many plants that contain substantial amounts of EPA.

The main source is microalgae. However, since algae is relatively low-fat, it is not a very concentrated source.

To get around this, most people take algal oil supplements, which are highly purified sources of both EPA and DHA (35).

Microalgae is actually the original source of omega-3s in the marine food chain, which is why seafood is one of the best food sources of EPA and DHA (36).

You might also see krill oil available on the market, but krill are actually small marine animals and are not vegan.

Many omega-3 fortified food products are also available, but it is important to read the label to make sure they contain EPA and/or DHA, and not just ALA.

What are the health benefits of EPA?

One of the main functions of EPA is to compete with omega-6 fatty acids for the production of eicosanoids, which can generally be either pro-inflammatory or anti-inflammatory (37, 38).

This is why people talk about the importance of having a good balance of omega-6 and omega-3 fatty acids in the diet. More omega-3s = more anti-inflammatory eicosanoids, while too many omega-6 fatty acids can spur inflammation.

This is why high doses of fish oil are often recommended for people with dyslipidemia (41).

Other health benefits associated with EPA (and DHA) include improved cardiovascular health and reduced symptoms of some mental health disorders (42, 43, 44, 45).

It can be made from EPA, but humans are not very good at this conversion. Because of this,  most people consume DHA through food and/or take supplements.

What are the food sources of DHA?

Food sources of DHA are generally the same as EPA. The highest amounts of DHA are found in fatty fish, but microalgae is a good vegan source as well (46).

What are the benefits of DHA?

DHA is excellent for vision and the nervous system.

It is especially good at increasing the fluidity of cell membranes and is found in the highest amounts in the brain and retina (47, 48).

Compounds known as neuroprotectins can be made from DHA, which are potent antioxidants that protect these important cells and tissues from oxidative damage (51, 52).

However, DHA tends to raise LDL cholesterol levels a little more than EPA (although whether this even matters is debatable) (35, 53). 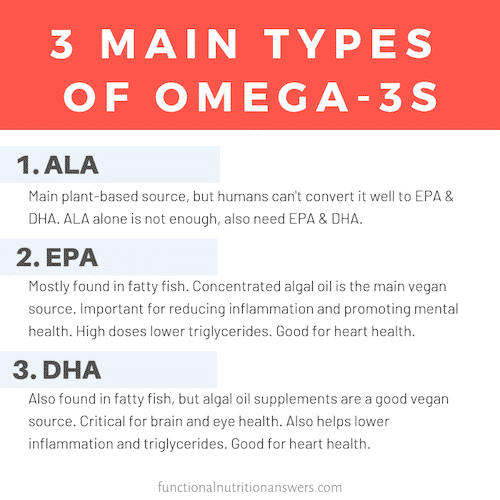 How Much Omega-3 Is Needed?

Recommendations vary based depending on why you’re interested in taking omega-3s.

An “Adequate Intake” (AI) is basically the amount of a nutrient that is ASSUMED to be adequate for overall health. This type of recommendation is made when there isn’t enough evidence to establish a “Recommended Daily Intake” (RDA).

In contrast, there are no official intake recommendations for EPA and DHA at this time.

However, health organizations around the world generally recommend getting 250-500 mg of EPA + DHA (combined amount) per day for optimal health (54, 55, 56).

For reference, the Academy of Nutrition and Dietetics officially recommends the higher dose of 500 mg EPA + DHA daily (57).

Instead of recommending a specific amount, some organizations simply suggest consuming fatty fish two times per week, since it is a natural source of these nutrients (58).

Unfortunately, most Americans are not meeting these recommendations and only get about 100 mg of EPA + DHA per day (59).

For Vegans and Vegetarians

Although it is known that vegans and vegetarians tend to have lower blood levels of EPA and DHA, there are no specific dosage recommendations other than the standard 250-500 mg per day (60, 61).

It is generally recommended that vegans and vegetarians meet their EPA and DHA needs by taking algal omega-3 supplements and consuming food sources of ALA (61, 62).

However, it’s important to note that there is currently no evidence that vegetarians and vegans consuming low amounts of DHA have any additional adverse health effects (60).

For women who are pregnant or breastfeeding, an additional 200 mg of DHA per day is recommended to encourage healthy brain, retina, and nervous system development (63, 64).

People with inflammatory conditions may benefit from even higher intakes of omega-3s.

The American Heart Association recommends 1,000 mg of EPA + DHA (combined) per day for people with a history of heart disease, taken under the guidance of a physician (65).

However, there is some concern that using high-dose EPA or DHA as an anti-inflammatory may be more of a nutraceutical approach, simply blunting the inflammatory response without actually getting to the root cause of the inflammation (39).

The Importance of Vitamin E?

Fats are very sensitive to oxidation, and too many oxidized fats within the body can promote inflammation (71, 72).

Vitamin E is a major fat-soluble antioxidant within the body that helps prevent this oxidation.

Some researchers believe that people taking supplemental omega-3s may need additional vitamin E to prevent excessive oxidation, but there has been no real consensus in the literature (73, 74, 75, 76, 77). 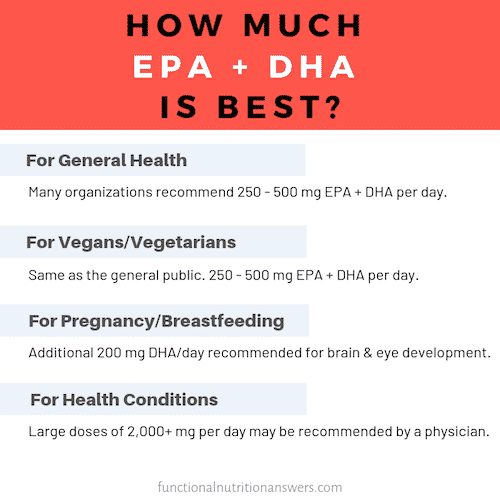 Studies suggest that using omega-3’s to reduce inflammation may not always be a good thing if that inflammation was acting in a protective manner (78).

For example, one study in mice found that giving high doses of omega-3’s reduced intestinal inflammation, but actually increased the risk of sepsis, because the inflammation was protecting against bacteria crossing into the bloodstream (79).

As always, you should speak with your doctor before beginning any new supplement regimen.

Do Vegan Omega-3 Supplements Work as Well as Fish Oil?

Although the research is limited, a few studies have shown that algal omega-3 supplements raise blood levels of DHA just as effectively as eating fish or taking fish oil supplements (80, 81, 82, 83).

To boost absorption, omega-3 supplements should be taken with meals, and preferably ones that contain fat (84).

How to Choose a Good Vegan Omega-3 Supplement

Here are some quick tips for choosing a good omega-3 supplement:

If you are not sure whether you would benefit from an omega-3 supplement, you could consider testing your EPA & DHA levels first.

The HS-Omega-3 Index, which measures red blood cell membrane levels of EPA and DHA, is considered to be a good long-term indicator of fatty acid status over the last few months (88, 89, 90).

This is generally considered to be a more helpful measure than plasma levels, since blood levels of EPA & DHA don’t necessarily reflect tissue levels (91, 92). 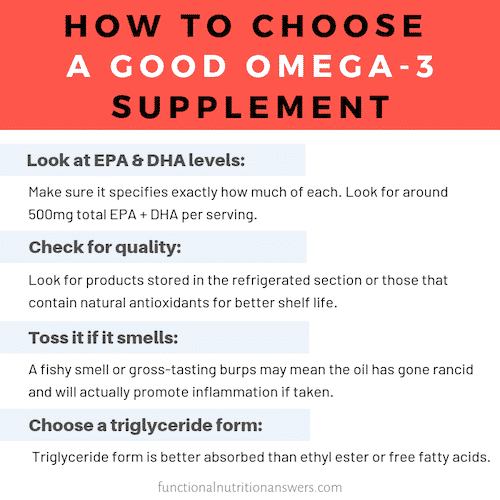 There are hundreds of vegan omega-3 supplements to choose from, so we’ve narrowed it down to the best algae based omega 3 product from our favorite brand.

Please note that as an Amazon Associate I earn from qualifying purchases.

A soft gel form of algal omega-3 is also available from Nordic Naturals. It contains 390 mg DHA and 195 mg EPA per serving (which is 2 softgels).

Labdoor did an independent analysis on this supplement and rated it a 97.9/100 for overall quality.

When tested, it actually contained slightly more EPA & DHA than claimed on the label and was within the California Prop 65 limits for heavy metal contamination and had not gone rancid.

This is an especially good option because it is affordable and easily found in grocery stores or bought online here.

Omega-3 supplementation is generally considered to be low risk, especially at doses below 5 grams per day (94).

However, you should always consult with your physician before taking a new supplement.

This is especially true for people taking blood thinning medications, because some studies (but not all) have shown an increased risk of bleeding in people taking high doses of omega-3 supplements (95, 96, 97, 98, 99, 100).

Your doctor can help you decide whether the benefits outweigh the risks and periodically monitor your bloodwork.

Side effects of taking omega-3 supplements are usually mild, and may include stomach upset, heartburn, diarrhea, a bad taste in your mouth or smelly sweat (101, 102).

Spacing out your supplements into smaller doses throughout the day may help reduce these effects.

Supplementing with DHA may also increase LDL cholesterol levels, but this increase appears to be relatively small (only about 3%) for doses around 2,000 mg per day (94).

However, higher doses of the ethyl ester form of EPA + DHA found in prescription-strength supplements may increase LDL levels by up to 32% (94, 103).

This does not appear to happen with high dose EPA-only supplements, but more research is needed (103).

All three types of omega-3s are important, but evidence shows that EPA and DHA may have unique benefits, especially for reducing inflammation and boosting brain and retinal health.

Vegan foods, such as nuts and vegetable oils, contain large amounts of ALA, but EPA and DHA are mainly found in animal foods (fish and meat).

Because there are not many adequate vegan food sources of EPA and DHA, those who follow a vegan diet often have lower levels of these fatty acids in their blood. Though, it’s unclear whether these lower levels are harmful.

There are no official recommendations for dosing, but most organizations suggest around 500 mg of EPA + DHA per day for general health.

Our preferred brand of vegan omega-3 supplements is Nordic Naturals, which can be found in most stores or online. 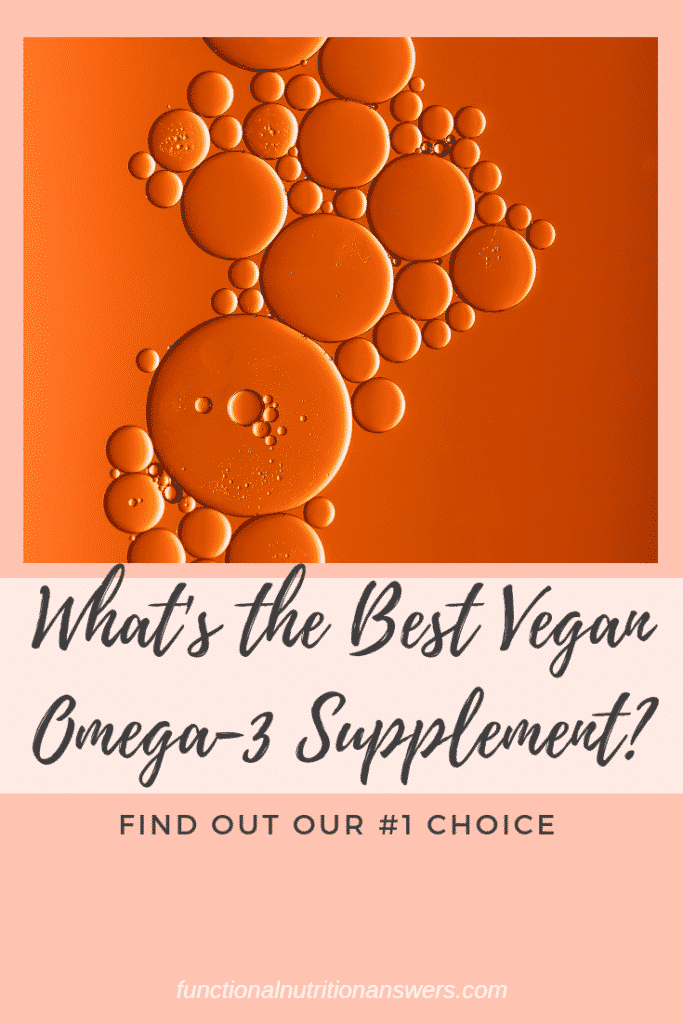 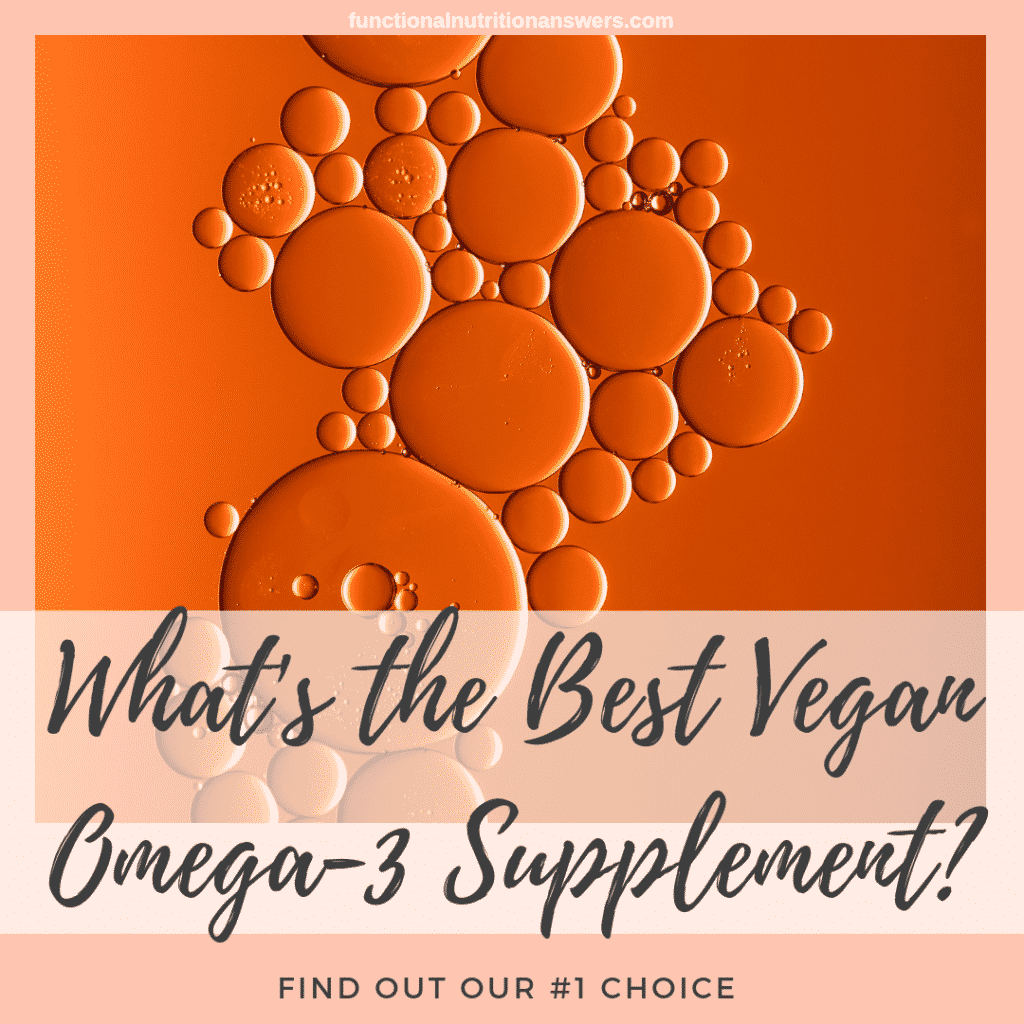 11 thoughts on “What Is the Best Vegan Omega 3 Supplement?”