Between 12% and 19% of the North American population suffers from chronic constipation, which can have a negative effect on quality of life (1).

Typical treatments, such as laxative drugs, often have uncomfortable side effects, so many people turn to alternative treatments like olive oil.

But does olive oil really work?

Keep reading to see what the research says about using olive oil to treat constipation.

Please note that this article contains affiliate links. As an Amazon Associate, we earn from qualified purchases.

It’s unclear exactly why, but women and people over the age of 65 are at the highest risk (1).

These are some of the symptoms of constipation (2):

Having short bouts of constipation from time to time is normal and may be triggered by traveling or changes in diet and physical activity.

Chronic constipation, on the other hand, is more serious and occurs when these symptoms last for at least 3 months (2).

If you suspect you might have chronic constipation, it’s best to see a doctor who can rule out any underlying medical conditions.

Constipation is often a multifactorial condition, so there are many potential causes:

There are many medical conditions that can contribute to constipation, but these are some of the most common (3, 4):

Sometimes medical or surgical treatment can be used to resolve underlying conditions that cause constipation, but often a combination of lifestyle changes and laxatives are used to manage symptoms.

Opioid drugs are notorious for causing constipation in 40-60% of patients who take them (5).

In fact, a separate diagnosis, called opioid-induced constipation (OIC), is reserved for those whose constipation is caused by these drugs (2).

But opioids aren’t the only drugs with constipating effects.

These are some of the other drugs and supplements that can also cause constipation (6, 7, 8, 9):

If your constipation is caused by one or more of these drugs, your doctor may work with you to adjust your dose or substitute with another medication.

One frequently overlooked cause of constipation is dysbiosis, an imbalance of gut bacteria.

It’s unclear exactly how these alterations in bacteria lead to constipation, but it’s thought that they might influence intestinal motility by changing the metabolic environment of the gut (11).

Inadequate physical activity has been linked with an increased risk of developing constipation (12, 13, 14).

One study found that 60% of healthy men who were put on bed rest for 35 days developed constipation (15).

Exercise helps to prevent constipation by decreasing transit time (the time it takes for stool to move through the intestines) (16, 17).

When transit time is faster, there is less time for the colon to absorb water from the stool, so hard, dry stools that are difficult to pass are less likely.

During digestion, undigested food waste moves from the small intestine to the colon, where excess water is absorbed (18).

Normally, this is a good thing, as it allows the body to conserve water and prevents loose stools.

HOWEVER, in a state of dehydration, the colon absorbs more water than usual, leading to stool that is dry, hard, and more difficult to pass (3).

Those most at risk of dehydration-related constipation are the elderly and anyone who has experienced excessive fluid losses due to diarrhea or vomiting (19).

Although you’ll often hear that constipation is caused by a low-fiber diet, the evidence to support this is surprisingly weak.

Studies have been conflicting: some have shown that fiber improves symptoms of constipation, but many others haven’t (20, 21, 22, 23).

It may depend on the type of fiber consumed: soluble fiber, which forms a gel and softens stool, tends to do a better job at treating constipation than insoluble fiber (24, 25).

In some cases, however, increasing fiber intake may actually make matters worse.

One study found that a majority of people with chronic constipation were able to reduce symptoms and have more frequent bowel movements by LOWERING their fiber intake (26).

Well, we only found 2 studies that have evaluated the effect of olive oil on constipation, but both showed promising results.

In the first study, researchers were comparing different bowel-cleansing regimens for colonoscopy preparation (27).

They evaluated the conventional preparation, which involves drinking 4 liters of a polyethylene glycol electrolyte solution (PEG-ELS), against an experimental regimen in which patients drank one-fourth cup of olive oil mixed into a glass of apple juice before consuming 2 liters of PEG-ELS.

Surprisingly, the olive oil regimen did a BETTER job cleansing the colon, and patients found it to be more tolerable than the conventional preparation.

The second study compared the effects of olive oil and flaxseed oil to mineral oil (a common laxative made from petroleum) on constipation symptoms (28).

For 4 weeks, patients consumed 4 to 6 milliliters (about 1 teaspoon) of oil each day, away from meals, and monitored their symptoms.

The olive oil and mineral oil were similarly effective, both significantly reducing symptoms of constipation.

How Does Olive Oil Reduce Constipation?

There are a few ways in which olive oil may help alleviate constipation:

Bile (made up of bile acids) is produced by the liver and released into the small intestine where it acts as an emulsifier, separating fat molecules so that they can be more easily digested and absorbed (29).

Most bile is reabsorbed in the gut and recycled by the liver, but about 5% continues on to the colon, where certain bile acids act as natural laxatives by increasing water secretion and colonic contractions (30).

In fact, some studies have shown that patients with constipation tend to have lower levels of bile acids compared to healthy controls (31, 32).

It’s thought that because olive oil contains fat, it promotes bile secretion, increasing the likelihood that more bile acids will end up in the colon to exert their laxative effects. However, more research is needed on this topic.

2. Lubricates the Colon and Softens Stool

Olive oil acts as a lubricant by forming a slippery, waterproof layer around the stool, allowing it to pass smoothly through the colon and rectum (27).

It also softens stool by forming an emulsion of water and oil within the feces (33).

However, this can only happen if the olive oil is not completely absorbed in the small intestines.

It’s not clear what dose is required to exceed the absorptive capacity of the small intestine, but some experts believe that 30 mL (2 tablespoons) might be enough (27).

More research is needed, but a few studies in animals show that extra virgin olive oil has the potential to protect against dysbiosis (imbalanced gut bacteria) by increasing microbial diversity (34, 35).

One study actually found that oleic acid (a fatty acid found in olive oil) increased the amount of Bifidobacteria, which may improve intestinal barrier function and prevent leaky gut (36, 37).

Another way olive oil benefits gut health is through polyphenols, which are chemicals found in plants that have health-promoting properties.

The polyphenols in olive oil inhibit the production of proinflammatory mediators and decrease intestinal inflammation, which may lower the risk of developing inflammatory bowel disease and colon cancer (38, 39, 40).

How to Use Olive Oil for Constipation

EVOO is the oil produced from the first pressing of the olives, so it contains the highest levels of antioxidants and other beneficial polyphenols (38).

There isn’t a recommended dose of olive oil for treating constipation, but researchers have used between 1 teaspoon and one-fourth cup per day (27, 28).

For most people, 1-2 tablespoons every day (taken away from food) until symptoms improve is probably reasonable.

We’ll discuss some ways to do this below.

If you’re the type who likes to rip off the band-aid, this might be the best option for you!

Simply swallow 1-2 tablespoons of olive oil in one gulp, away from food.

You may notice a peppery, stinging sensation in the back of your throat after swallow the olive oil, but this is normal and expected.

This feeling is caused by oleocanthal, an anti-inflammatory compound similar to ibuprofen that is found in high-quality EVOO (39, 40).

To help hide the taste, olive oil can be mixed into beverages, such as coffee or fruit juice.

Coffee is a great choice because it is known to stimulate contractions in the colon and promote the urge to poop (41, 42).

Some people blend the coffee and olive oil together to make it creamier and less “oily” tasting.

If you prefer to use fruit juice, apple, prune or pear juice make the best options because they contain high amounts of sorbitol, a poorly absorbed sugar alcohol with laxative effects (43, 44).

Compared to laxative drugs, the potential side effects of using olive oil for constipation are minimal.

Diarrhea is the most common side effect, but typically only occurs if very large amounts (more than a few tablespoons) are consumed at one time (27, 28).

It’s also important to keep in mind that olive oil is a very calorically-dense food. One tablespoon of olive oil contains 120 calories and 14 grams of fat, so weight gain is possible if your overall calorie intake increases (45).

Some people may be concerned that the extra fat consumption could lead to increased blood cholesterol levels, but studies actually show that olive oil decreases apolipoprotein B, which is thought to be a better marker of cardiovascular disease than LDL (46, 47).

Olive oil is safe for most people, but it is not recommended for infants, because they have not developed the proper swallowing coordination to keep from aspirating on the oil (48, 49).

While the research is limited, there is evidence that olive oil can be used to treat constipation and may be as effective as mineral oil, a commonly used laxative.

The easiest way to use olive oil for constipation is to take a “shot” containing 1-2 tablespoons of olive oil every day, but it can also be added to coffee or juice.

Side effects are rare, but diarrhea may occur if very large amounts of olive oil are consumed at once. 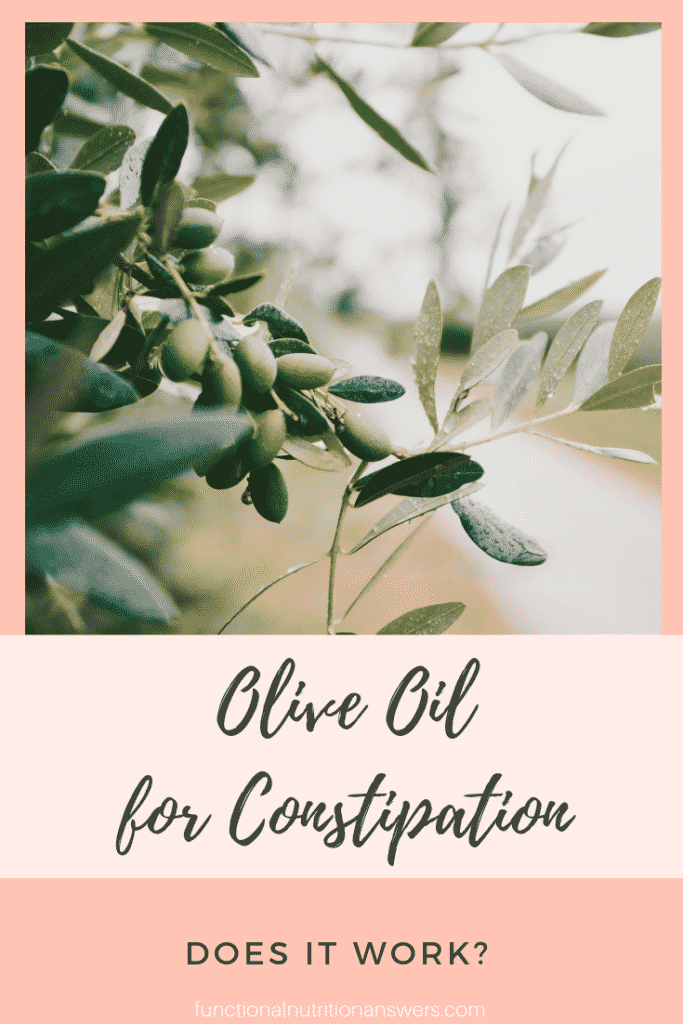 Amy is a registered dietitian nutritionist and certified LEAP therapist. She received her Masters in Nutrition Diagnostics from Cox College and her Bachelors in Dietetics from Missouri State University. Her passion is finding ways to communicate nutrition research in an interesting and easy-to-understand way.

5 thoughts on “Olive Oil for Constipation: Does It Work?”

This site uses Akismet to reduce spam. Learn how your comment data is processed.