Have you heard the phrase “leaky gut” thrown around on the internet, but you’re not quite sure what it means?

Does it conjure up images of your intestines leaking out their contents, but you feel like that can’t be what everyone is talking about??

Don’t worry, it’s a little less dramatic (and a little more complicated) than that!

“Leaky gut” is actually a simpler term for “increased intestinal permeability” – a fairly common phenomenon associated with many chronic conditions (1).

In this article, we’ll provide a brief overview of what leaky gut is, why it occurs, and how medical professionals can actually test for it.

What Is Leaky Gut?

When the gut is “leaky”, it allows molecules that are normally kept out (like larger food particles or endotoxins) to pass through the lining of the intestines and into the bloodstream.

To understand why this might happen, first, we need to explore a little bit about the anatomy and physiology of the small intestine. We’ve broken it down into simple terms below.

The Anatomy of the Small Intestinal Barrier

Cells that make up the lining of the small intestine (where we absorb the bulk of our nutrients) are called enterocytes.

They form a barrier between the lumen (inside cavity) of the intestines and the rest of the body (3).

Their purpose is to regulate the absorption of vital nutrients and prevent anything dangerous (like bacteria, undigested food particles, or toxic substances) from being absorbed into the bloodstream (3).

In a healthy gut, most molecules (about 90%) are absorbed THROUGH the enterocytes, processed as needed, and then passed on into the bloodstream (4).

This is called the “transcellular” pathway and is tightly regulated to keep out anything harmful (5).

However, some molecules, especially small polar molecules like water, can also pass between the intestinal cells directly into the bloodstream (5).

This is known as the paracellular pathway.

Enterocytes are held together by connections known as tight-junctions, adherens junctions, and desmosomes (6).

Normally, the permeability between enterocytes is very low and not many molecules are allowed to pass.

However, the permeability of these junctions can be influenced by a variety of factors, including regulatory proteins, nutrients, inflammatory cytokines, and bacteria (7).

When these factors cause tight junctions to stay open for too long, substances that otherwise wouldn’t be allowed to cross the intestinal barrier are able to cross, which can trigger an inflammatory immune response (4, 8).

And ultimately, when our bodies are exposed to inflammation over a long period of time, we are more likely to develop a variety of chronic diseases (9, 10, 11). 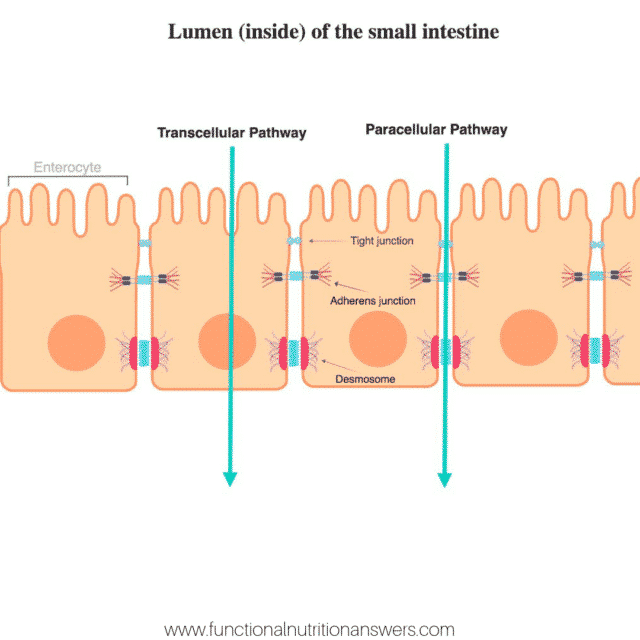 Potential causes of leaky gut that are currently being investigated include:

There are many conditions associated with leaky gut, but it is still debated whether increased permeability is a cause or consequence of these conditions.

These are some of the conditions that have been associated with leaky gut:

What Types of Tests Are Available?

There are a few different ways to measure intestinal permeability, so let’s review the most common methods below.

The differential sugar test has been used since the 1970s and is still the most popular way to test intestinal permeability (55).

There are technically a variety of sugars that can be used in this test, but lactulose and mannitol are most common and will be the focus of this review.

How does it work?

To perform the test, a sweet solution containing lactulose and mannitol is consumed after an overnight fast.

Then, all excreted urine is collected for 6 hours in order to measure the amount of lactulose and mannitol it contains (56).

Lactulose is a larger sugar, so it is not normally absorbed whole. If lactulose is found in the urine, it is assumed to have passed between the cells, indicating a “leaky” gut (56).

In contrast, mannitol is a smaller sugar alcohol that can be absorbed through enterocytes, particularly via small pores at the top of the villi of the small intestine.

The purpose of including mannitol in the drink is two-fold:

This test is typically performed at hospitals or clinics, but health practitioners can also order at-home test kits for patients. Genova Diagnostics is a popular choice for these home testing kits, as well as Doctor’s Data.

The test results are usually expressed as a lactulose-to-mannitol ratio (LMR), in which the percentages (compared to the original oral dose) of lactulose and mannitol present in the urine are compared to each other (LMR = %lactulose / %mannitol) (57).

A higher LMR is associated with increased gut permeability (aka leaky gut).

It is important to note that this test may not be accurate when someone has SIBO (small intestinal bacterial overgrowth) because bacteria in the small intestine can metabolize these sugars before they are absorbed (59).

This could lead to low levels of lactulose and mannitol in the urine and potentially false-negative results.

Is there evidence to support this test?

However, lactulose is still a relatively small molecule (molecular weight of 342 Da), so it may not actually be a good indicator for how larger food antigens or bacterial toxins (which usually have a molecular weight of 5,000+ Da) would pass through the gut (64).

It is also important to note that other areas of the digestive tract can also become “leaky”, but different types of molecules are used to test the permeability of those regions (sucrose for the stomach, sucralose for the colon, or PEG or EDTA for the whole tract) (24, 59).

The Verdict: The lactulose & mannitol urine test is a popular way to evaluate permeability of the small intestine and is backed by decades of research. However, it’s important to note that this test may not be accurate for people with SIBO.

Zonulin is a regulator protein that basically acts like a gatekeeper of the intestines.

When zonulin levels rise, the tight junctions between enterocytes open slightly in order to allow nutrients and other molecules to move between them (1).

Since the discovery of the regulatory protein zonulin in the year 2000, scientists have been measuring serum zonulin levels to determine the likelihood of increased intestinal permeability (30).

How does it work?

Testing for zonulin is a much simpler process than the differential sugar test.

If you choose to have this test done, your blood will be drawn and sent to a lab where it will be evaluated for the amount of zonulin it contains.

High levels of zonulin in the blood means too much zonulin has been released in the gut, which probably signifies increased permeability (1).

There are several labs that offer zonulin testing:

Is there evidence to support this type of test?

While many studies have found high zonulin levels in patients with conditions associated with leaky gut, there are a few issues with using this lab test as a way to diagnose leaky gut (30, 65, 66).

Zonulin levels are prone to large fluctuations because zonulin is targeted by the immune system.

Once released into the bloodstream, macrophages target and destroy zonulin, so blood levels will vary for each person from day to day, based on their immune response (67, 68).

Another issue is that most labs use a technique called ELISA (enzyme-linked immunosorbent assay) to measure zonulin levels in blood samples.

However, a study released in 2018 found that ELISA often improperly identified other types of proteins as zonulin, leading to falsely elevated results (69).

In one study, researchers actually tested patients using both lactulose/mannitol and zonulin testing.

The results of the two tests didn’t correlate very well, so some scientists have questioned the usefulness of serum zonulin testing (65, 67).

Testing for zonulin antibodies might be a better alternative.

A recent study found that zonulin antibody testing had better reproducibility (meaning that it consistently showed the same results for the same patient) than serum zonulin levels (67).

Basically, when zonulin is released into the bloodstream, it triggers certain immune cells to produce specific antibodies (also called immunoglobulins) that recognize zonulin.

Because these zonulin antibodies are more stable and remain in the bloodstream longer, they are thought to be a better measurement of zonulin release than serum zonulin  (70).

The Verdict: Testing for zonulin antibodies (through labs like Cyrex or Vibrant Wellness) is more accurate than testing serum zonulin alone. However, it’s unclear whether this is better than lactulose/mannitol testing.

3. Other Types of Antibody Testing

In addition to testing for zonulin antibodies, other types of antibodies are being used as indirect measures of gut permeability.

It is important to note that any testing that involves antibodies can be blunted by steroids or immunosuppressants.

Technically, the most direct way to test for leaky gut is to have an intestinal biopsy done (24).

After removing a sample of intestinal tissue, a device called an “Ussing chamber” is used to measure the transport of molecules across the lining of the intestines (74).

Using this information, it can be determined whether there is actually increased permeability.

Biopsy was the first method used when scientists began studying the concept of intestinal permeability. However, since this an expensive and invasive method, it is not typically used in clinical practice.

Instead, scientists used the information they learned from studying intestinal permeability to create less invasive tests, like the differential sugar test (75).

The Verdict: Intestinal biopsies for the evaluation of leaky gut may be accurate, but this method is far too invasive, expensive, and labor-intensive to be used regularly. It is typically only used in research settings. 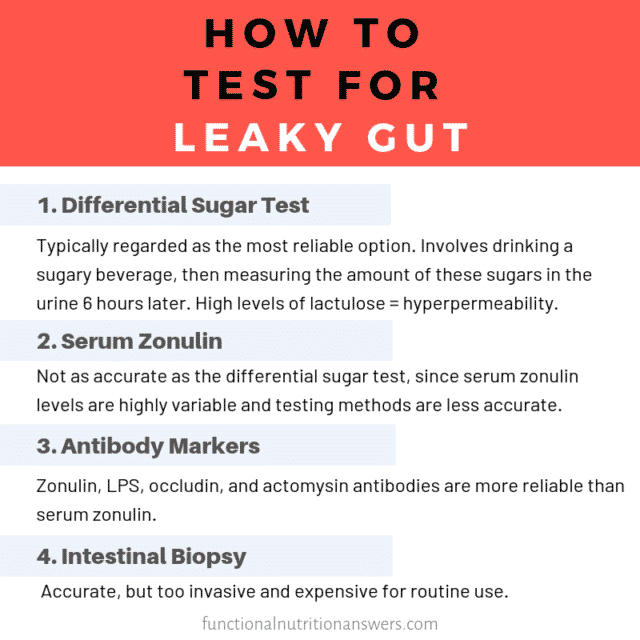 Should You Get Tested for Leaky Gut?

Many practitioners believe that testing for leaky gut is a waste of time and money for several reasons.

We know that leaky gut is linked with MANY health conditions (see above), so if you have any of them, there’s a very good chance you have leaky gut as well.

Downside #2: It doesn’t get to the root cause.

Sure, testing for leaky gut can tell you whether or not you have increased intestinal permeability, but many practitioners believe that leaky gut is more of a symptom than a root cause.

Ultimately, we need to know what actually triggered the leaky gut so that we can address that directly.

That’s why many practitioners prefer to evaluate or test for things that are likely to trigger leaky gut, like infections, stress, nutrient deficiencies, or alcohol and medication use.

Downside #3: Knowing if you have leaky gut will probably not affect your treatment.

Knowing whether or not you have leaky gut will probably not affect your treatment protocol.

Testing for leaky gut doesn’t get you any closer to figuring out the root cause (which can then be addressed directly).

Someone on a limited budget is probably better off requesting more targeted tests to determine why their gut might be extra permeable.

However, some practitioners do like to test for leaky gut to evaluate the effectiveness of their interventions.

So, for example, if intestinal permeability is high at the beginning of treatment and then reduced after therapy, this suggests that the treatment protocol was probably effective.

If you do choose to get tested for leaky gut, the best options are the differential sugar test (lactulose/mannitol test) and zonulin antibody testing.

Leaky gut (or, more technically, intestinal hyperpermeability) is a real phenomenon associated with many health conditions.

It occurs when the tight junctions between the cells that line our small intestines open up slightly, allowing larger molecules to “leak” through into the bloodstream.

When the immune system encounters these unexpected molecules, it can trigger an inflammatory response, which over time, is believed to increase the risk of many chronic illnesses.

However, leaky gut is probably more of a symptom than a root cause. Digging deeper to find the things that trigger leaky gut may be a better use of time and resources.

Because of this, most healthcare practitioners don’t specifically test for leaky gut unless they plan to use it as a marker of treatment effectiveness.

If you do plan on testing for leaky gut, the differential sugar test or serum zonulin antibodies are the preferred methods. 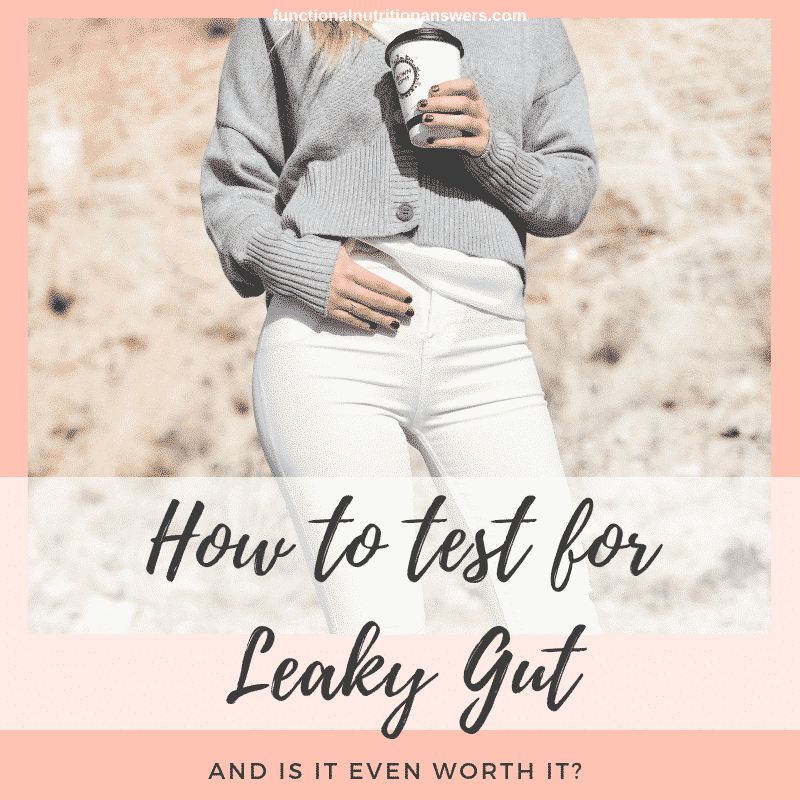 7 thoughts on “How to Test for Leaky Gut”